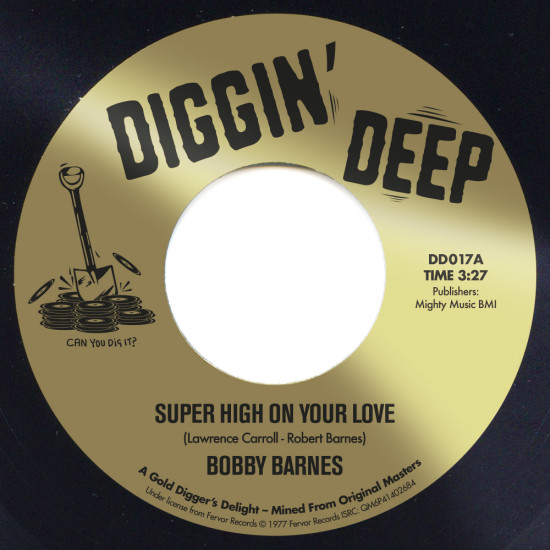 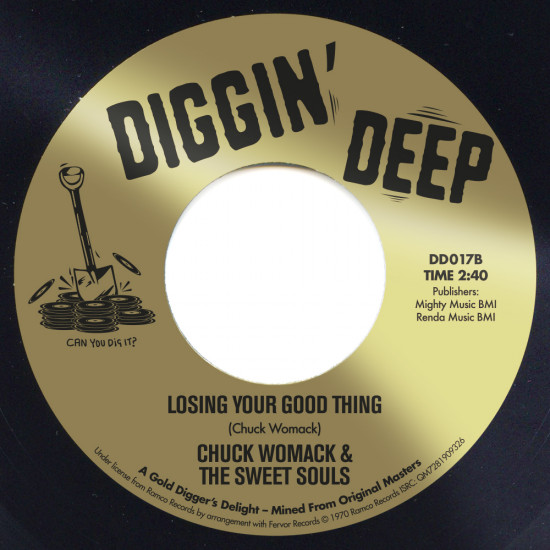 It is with great pleasure that we announce the upcoming Diggin’ Deep 45. A late 70’s midtempo floater backed with an early 70’s raw soul deepie.

These tracks are from the Raina and Ramco labels respectively, out of Phoenix, Arizona, USA.

This UK release has been somewhat delayed due to pressing plant problems throughout Europe and the appearance of the A side on a European label, where it seemed sensible to postpone DD017, giving both labels a chance to circulate.

Enigmatic 70s and 80s Soul artist Bobby Barnes knew how to throw it down with his soulful, no-nonsense vocals and bluesy guitar work. Bobby’s deep grasp of Blues, Soul and R&B helped form his strong, sophisticated approach. That versatility is evident across Bobby’s heartfelt ballads, smooth slow-jams and early 70s anthems. Bobby Barnes scored releases on the Discovery, Poor Man’s, Marvel International, Cross-Tone, and The Scam Sound record labels. Ultimately, the distinguished Mr. Barnes found his way to Fervor Records via Motown staff drummer, producer, and label exec Lawrence Carroll. The two met while performing at Harlem’s famed Apollo Theater. Immediately captivated by Barnes’ charismatic stage prowess, Carroll kept tabs on the singer and signed him to his newly formed Raina label, releasing several singles. Produced and arranged by Lawrence Carroll, this is the first release on a UK label of this great side and an essential addition to your Diggin’ Deep collection.

Chuck Womack is best known for the funky “Ham Hocks And Beans,” a song penned by Womack himself. The band gigged regularly at the Myles Lounge on 13th Street and Washington in Phoenix, AZ. They soon caught the attention of local music entrepreneur Floyd Ramsey. Ramsey signed Womack to his Ramco Records label on February 10, 1970. He paired the band with engineer Tim Hunnicutt at his flagship recording studio, Audio Recorders Of Arizona. The group laid down four sides for the label with “Ham Hocks And Beans – Part 1 and Part 2“ released on Ramco later that year. The band featured Chuck Womack on Vocals, Carl Gholson on sax, Delmar Stewart on drums, Bubba Cita on bass, and Raymond George on guitar. Two additional songs from those sessions were found in the Ramco archives. “Sweet Soul Special” and the raw deep soul track “Losing Your Good Thing” in 2019.

Chuck Womack met his beautiful wife Vivian at the Myles Lounge and they were married February 6th, 1972, just two years after he signed with Ramco. Mr. Womack passed away February 3, 2018 leaving his lasting legacy on the Phoenix Soul scene and this, his first release on a UK label, or anywhere else in the world, another essential addition to your Diggin’ Deep collection.

DD 014A Melvin Davis "Thinking Of You" / DD 014B Melvin Davis "Let Love In Your Life"
The latest 45 is an astounding double-sider, from the legendary Melvin Davis, that Diggin’ Deep have been looking forward to releasing on vinyl for qu..
£12.00
Ex Tax:£12.00
Add to Cart
Add to Wish List Compare this Product
Quickview 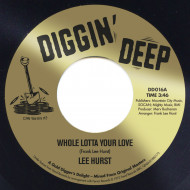 DD 016A Lee Hurst "Whole Lotta Your Love" / DD 016B Terry & The Pyrates "Someone"
It is with great pleasure that we announce the latest Diggin’ Deep 45. A much-anticipated issue of an iconic and sought after early 70’s Soul 45, back..
£12.00
Ex Tax:£12.00
Add to Cart
Add to Wish List Compare this Product
Quickview

DD 010A The Exceptions "So Much in Love" / DD 010B Milton Bennett "I’m Ready"
It is with great pleasure that we announce the latest Diggin’ Deep 45 which will be available for you to pre-order before the Valentine’s Day Release ..
£12.00
Ex Tax:£12.00
Add to Cart
Add to Wish List Compare this Product
We use cookies and other similar technologies to improve your browsing experience and the functionality of our site. Privacy Policy.