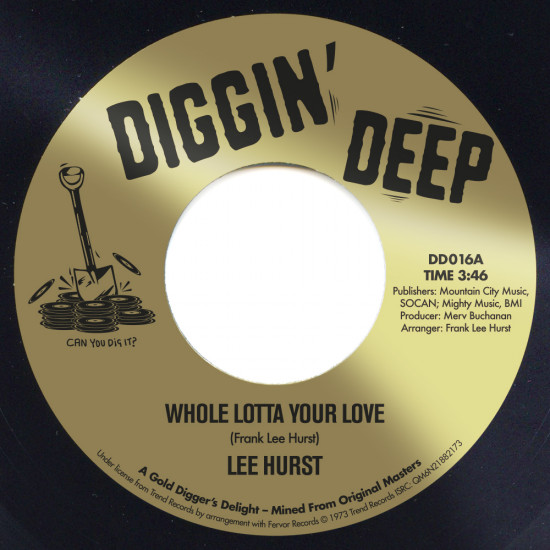 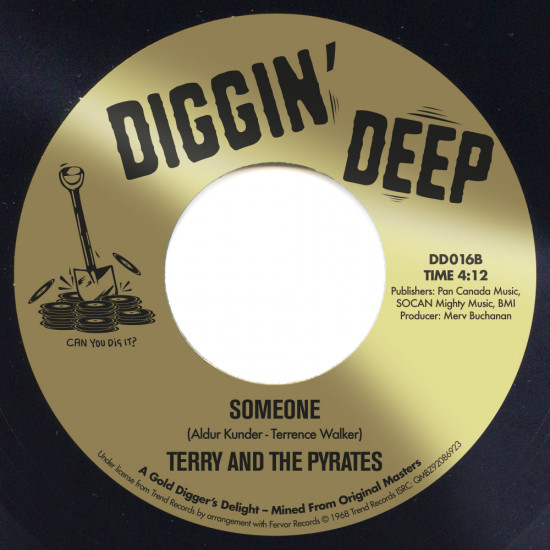 It is with great pleasure that we announce the latest Diggin’ Deep 45. A much-anticipated issue of an iconic and sought after early 70’s Soul 45, backed with a legendary, underground, deep ballad; two beautiful sides, to lift your spirits and feed your soul!

Both these tracks are from the vast repertoire of Trend Records in Calgary, Canada.

London Ontario’s Frank “Lee” Hurst cut his teeth playing in such Canadian bands as Pepper Tree, which developed a following on the Ontario dance circuit

While known as a bassist, Lee’s soulful vocals eventually caught the ear of record exec Merv Buchanan, who laid down two of Lee’s originals - “Whole Lotta Your Love” & “Saturday’s Wild.”

Gerry Lacoursiere, Toronto-based president of A&M Canada released “Whole Lotta Your Love” as a single in 1973. The song received strong airplay throughout Canada but went no further.

Many years later, recognised as a high calibre ‘Sweet and Low’ Soul tune, the record captured the imagination of the UK collector’s scene. Over the past few years, it has been deemed perfect for such enlightened Soul venues as Carib Soul, Majestic Soul and our own Diggin’ Deep events, aired by the likes of Mark Houghton, Tommo and Blake Helliwell.

The recording itself is so alluring it was picked up by Sony Pictures and featured in the soundtrack of the award-winning movie ‘If Beale Street Could Talk’ in 2018. This has only added to the disc’s growing appeal and subsequent demand, leading to this timely and welcome vinyl issue.

Following the release in 1973 of his seminal Canadian single, Mr. Hurst more or less disappeared - leaving this soul masterpiece shrouded in mystery and intrigue. We can now reveal that in 2010, Lee Hurst quietly passed away in his hometown of London, Ontario, unaware that his recording would grow to become so cherished and appreciated in later years. The limited edition, Diggin’ Deep collectors 45, aims to satisfy some of the newfound demand for this very special, vintage, Soul recording.

Terry & The Pyrates, were a hot R&B band with roots at The Modern Age Lounge, in east end Toronto. Originally known as “The Dana” they made waves throughout the greater Toronto area in the late 1960s - playing high school dances throughout the city.

The original line-up of Glen Daigle (vocals), Val Ruffo (guitar), Mike Levine (bass), Lance Wright (drums) and Aldur Kunder (organ) shifted when Daigle left the band and was replaced by the more experienced vocal powerhouse Terry Walker, who had worked as MC and back-up singer for The Associates. John Tarsey, Peter Misfud and John Rudder were quickly added to the horn section and the band’s sound exploded in new and exciting Soul and Funk directions.

“Someone” was a standout feature of their shows as this live recording, from one of their concerts in Calgary, superbly demonstrates. The track received extensive regional airplay, as they gigged heavily throughout Ontario, but went no further. After a number of years the members went their separate ways with members forming R&B band Aurora Borealis.

DD 015A James Carr "I Don’t Want To Be Hurt Anymore" / DD 015B James Carr "There Goes My Used To Be"
For our latest 45 release we return to Memphis, Tennessee, for a double-sider that Diggin’ Deep are extremely proud to bring to you. This being the fi..
£12.00
Ex Tax:£12.00
Add to Cart
Add to Wish List Compare this Product
Quickview

DD 014A Melvin Davis "Thinking Of You" / DD 014B Melvin Davis "Let Love In Your Life"
The latest 45 is an astounding double-sider, from the legendary Melvin Davis, that Diggin’ Deep have been looking forward to releasing on vinyl for qu..
£12.00
Ex Tax:£12.00
Add to Cart
Add to Wish List Compare this Product
Quickview

DD 013A Alpaca Phase III "Someone To Run To" / DD013B Frederick Knight "It Ain't No Fun"
Our latest 45 release is another Birmingham, Alabama, double-decker that Diggin’ Deep are extremely proud to be able to bring to you. This being the f..
£12.00
Ex Tax:£12.00
Add to Cart
Add to Wish List Compare this Product
Quickview

DD 012A Bobby Burn "I'm A Lonely Man" / DD012B Bobby Burn "I'm A Dreamer"
The latest 45 is another superb double-sider that Diggin’ Deep are extremely proud to be able to bring to you. This is its first time on vinyl in almo..
£12.00
Ex Tax:£12.00
Add to Cart
Add to Wish List Compare this Product
We use cookies and other similar technologies to improve your browsing experience and the functionality of our site. Privacy Policy.